Home » Information » History of the Zuiderzee

History of the Zuiderzee

The Zuiderzee was a large inland sea, formed as the result of a series of floods around 1200. Over the years, it had been the source of many storm surges and floods that caused extensive damage and clamed many lives. Plans were made as early as the 17th century to separate the Zuiderzee (which literally means the Southern Sea) from the North Sea in an attempt to put a stop to these natural disasters. These eventually led to the construction of the Afsluitdijk (1927- 1932). The Zuiderzee ceased to exist and the new lake was given a new name: IJsselmeer. 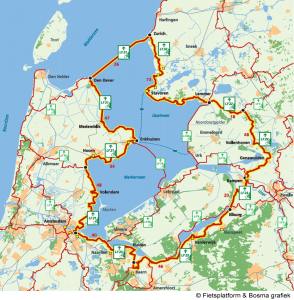 In the middle ages, ports such as Kampen, Stavoren, Elburg and Harderwijk were members of the Hanseatic League, participating in the Baltic maritime trade. This international association of merchants was a powerful economic force, especially in the 14th and 15th centuries. During the Dutch colonial period, towns on the western shore of the Zuiderzee, such as Amsterdam, Hoorn, Enkhuizen and Medemblik, became increasingly important, but when the North Sea Canal was completed in 1875, the Zuiderzee lost virtually all of its strategic significance for Amsterdam.

The Dutch refer to the 17th century as the Golden Age, because during this period their country was one of the richest and most powerful nations on earth. This was mainly due to the rapid growth in trade. The Verenigde Oost-Indische Compagnie (Dutch East India Company), established in 1602, became the largest and most powerful trading and shipping company in the world. During the Golden Age, the Zuiderzee was crucially important for the VOC’s merchant fleet; in fact, there probably wouldn’t have been a Golden Age if it had not been possible to sail on the Zuiderzee. This came at a price, however, as navigating the Zuiderzee could be extremely perilous, with storms and shallows causing many shipwrecks. Hundreds of wrecks have been found in the drained soils of Flevoland.

Before its enclosure, the Zuiderzee had been an important source of income for fishermen. In the years around 1900 in particular, fishing for herring and anchovies provided fishermen operating from the Zuiderzee ports with a good income. Once the Afsluitdijk had been completed, however, the salt water gradually became fresher. This led to the disappearance of most of the fish stocks, as only eels, pike, perch and smelt could withstand the change in conditions. This spelled disaster for thousands of fishermen who had earned their living on the Zuiderzee. Every fishing harbour on what had once been the Zuiderzee disappeared, with the sole exception of Urk.

The Closure and Reclamation of the Zuiderzee Act was adopted in 1918. This legislation had been prompted by two events: food shortages in the wake of the First World War, which meant that new agricultural land was needed, and a massive storm surge in 1916. In 1920, construction work started on the Amsteldiepdijk. This dike was 2.5 kilometres long, and was a good practice run for the building of the Afsluitdijk,  which was completed in 1932. In 1930, the Wieringenmeerpolder became the first polder – area of reclaimed land – in the Zuiderzee area. The Noordoostpolder, Oostelijk Flevoland and Zuidelijk Flevoland were all reclaimed between 1936 and 1968.

The former coast of the Zuiderzee

Perhaps you would like to experience the former coast of the Zuiderzee, with its Hanseatic towns, fishing villages and memories of the Golden Age? If so, you could cycle along the 400km Zuiderzee route. The route is shown on the adjacent map. You can cycle along the route using the Zuiderzee route booklet published by the Dutch Cycling Platform (Nederlands Fietsplatform). If you would prefer to have your baggage transported for you and every aspect of your holiday taken care of, take a look at the holidays  organised by Zuiderzee Cycling.